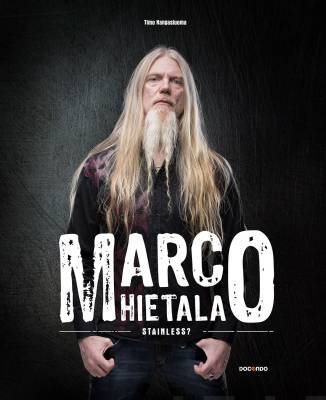 “It's such a fantastic and unreal feeling that, right now, there are no limits.”

SABOTAGE, SYDNEY CANN, PURGATORY, AND ABOVE ALL TAROT. Sweet Leaf, Jimsonweed, Sinergy... Marco's been involved in a lot of other bands before ending up as bass player and second vocalist in Nightwish. But there've also been plenty of other projects to keep Marco busy between the band's tours and recording. The man's musical abilities aren't limited to only playing, performing and composing; Marco has also worked as a sound engineer, mixer and producer.

On the one hand this is the tale of a misspent rock'n'roll youth in Finland and abroad, with all the cliches of drunken recording sessions and gigs that this entails-not to mention smashing up hotel rooms. On the other, we see a man out of sorts, and prone to bouts of depression and alcoholism. Through sheer willpower and persistence, however, Marco has turned this vulnerability into a personal resource and managed to take his life “from rags to riches”. We are also given a privileged insight into Marco's perspective on various institutions, people, and world current affairs along the way.